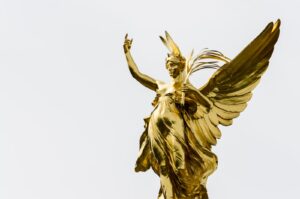 Viewed as a kind of sentient meddler, “the algorithm” is often positioned as the secretive puppeteer pulling the strings of the social media space. Netflix specials like The Social Dilemma and Black Mirror portray it as overtly responsible for creating political echo-chambers, radicalising youth behaviour, and driving the spread of misinformation. For social media marketers, it can be a behind-the-scenes wizard that assesses and determines which piece of content accumulates the majority of spend, eyeballs, and actions – whether we like it or not.

But, far from being evil, the algorithm should be viewed as our greatest ally in the ever-competitive attention economy.

Put simply, it is an equation that results in a ranking system.

In practice, this is incredibly complex and differs depending on the platform and individual user, as well as through their lifetime, and thus changing tastes and preferences. The simplest view is that the equation takes in data based on a user’s interactions to determine the order in which content is served to that specific user. These datapoints are wide-ranging and create a detailed picture of what is interesting or engaging to each user based on myriad criteria, including the objective, brand, category, content type, season, desired action, spend level and other competitive content in market at that time. This means that just because one piece of content worked for one objective, does not mean it will work for another.

This complexity, to me, is the value and the beauty of social media: real time data on what is or is not working to encourage a defined audience to take a specific action. The way the algorithm works demands that content be both bloody good AND well-matched to the desired end-consumer to get airtime.

TikTok in particular has led to a proliferation of excellently personalised content thanks to the For Your Page (FYP), and its ground-breaking transparency on how this algorithm works to serve more of what users like. Contrastingly, Meta has been notably cagey about how Instagram or Facebook rankings work, and it’s this lack of transparency that has contributed to opinions of ill-will towards the algorithm’s control over our time online.

But while there exists a plethora of research and insight into whether it is indeed evil, the truth resides far more in shades of grey than purely black and white. In a recent New Yorker article,  Gideon Lewis-Kraus penned a well-balanced analysis of the literature in support of and against social media’s onus when it comes to accelerating or inciting political and social decline across verticals like mental health, conspiracy mongering, and polarisation.

Throughout he pushes his interviewees to examine their own predilection to blame the all-knowing algorithm, urging them to consider whether the issues often credited to the rise of social media “are fundamentally political, social, and economic, and that to blame social media is to search for lost keys under the streetlamp, where the light is better.”

As Lewis-Kraus, Haidt and Bail, and many more have affirmed through dedicated and peer-reviewed analysis, the algorithm itself is not inherently good or inherently bad. Placing it in the camp of “evil” removes our own personal responsibility, while opting for “benevolent” licenses the same absolution of ownership over our time and life online. Ultimately, however, with issues as important as mental health on the agenda, a stronger stance must be taken – even if most information is not necessarily in overwhelming support of social media as the core of the problem.

At a brand and agency level, we have a responsibility to build a deeper appreciation for the complex calculation at the core of what drives content forward. As strong as a brand’s message might be, if it is communicated via a run-of-the-mill social tile, it won’t achieve top billing, even with spend behind it. Michelob Ultra’s “Save it, See it” campaign is a great example of this done well. Touted as ‘hacking’ the algorithm, rather than simply hoping for more shares and saves, this campaign draws attention to the actions that are higher ranking to ensure users are served more of their content.

Less cynically: social media is a connection-driven world, and to get a look-in, your content must win the algorithmic race to the target market.

By Katie Chandler, head of social at JOY

This article was first published by Mumbrella